Book > Major Work > Political Science & International Relations
Due to global supply chain disruptions, we recommend ordering print titles early.
SAGE online ordering services will be unavailable due to system maintenance on June 26th at 8:30 pm Pacific / 11:30 pm Eastern for 30 mintues. Thank you for your patience and we apologize for the inconvenience. 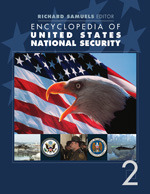 Share
December 2005 | 1 008 pages | SAGE Publications, Inc
Download flyer
Since the tragic events of September 11, 2001, the topic of national security has never been of broader concern to all Americans. Rarely have we felt as threatened as we do in our current security environment.

With over 750 entries, the Encyclopedia of United States National Security is the first single, concise reference source to provide accurate and informative answers to the many challenging questions of how, why, when, and where national security has evolved. In addition to presenting historical facts and analyses, this two-volume encyclopedia is designed to provide a comprehensive introduction to some of the more complicated and abstract questions concerning world politics and national security. A thoroughly interdisciplinary work, this Encyclopedia views national security from historical, economic, political, and technological perspectives.

The Encyclopedia of United States National Security encourages curiosity about international affairs and, in particular, the long list of issues that affect our national security. A first of its kind, this encyclopedia is a must-have resource for all school, community, and academic libraries.