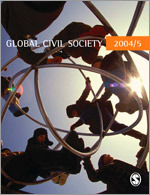 Share
October 2004 | 392 pages | SAGE Publications Ltd
Download flyer
The war in Iraq brought global politics into the living rooms of ordinary people around the world in 2003-4. This defining event, which influenced the domestic agenda in many countries, may change the way people perceive power and the politics of power.

The Global Civil Society Yearbook shows how those perceptions can be shaped by the huge diversity of individuals, movements, NGOs, networks - and the ideas and values they represent - acting across borders and beyond national politics.

Now in its fourth year of publication, the Global Civil Society Yearbook is the standard work on the topic, essential reading for social and political scientists, activists, students, journalists and policy makers.

Global Civil Society 2004-5 includes a wealth of data on globalisation, the rule of law, NGO growth, values and attitudes, governance, civil liberties and a chronology of the myriad protests, conferences and campaigns that are the sinews of global civil society.

"One of the great unreported events of the last decade has been the total explosion of nongovernment organisations in developing countries of the world. While I was shaving the other day, I looked in the mirror and thought, "Wow, I am an NGO!" I have always been interested in this, but I am more interested since I discovered I was one. And that's why I'd recommend this Yearbook."