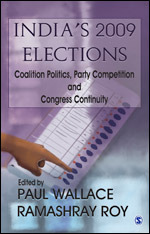 Authored by renowned scholars and analysts from various backgrounds, the collection of articles critically examines multiple areas of the Indian polity:

According to the contributors, the public outcome of the 2009 elections indicated a demand for integrity, continuity, and competence—values that were considered almost obsolete in today’s political scenario. At the same time, the contributors admit to problems in structure, providing for minority cultures, stability, and contentious public policy issues.

[The book] provides some interesting insights into an election which was the first in recent history to be devoid of high decibel emotional issues…. India’s 2009 Elections is an informative volume, not just for facts and figures but also for analysis, keeping some broad themes of Indian electoral politics front and centre.

This edited volume deserves to be acknowledged as a very valuable addition to the literature on election studies in India. It deserves to be read by all those political scientists, media persons and political leaders who are interested in understanding the nature of Indian Politics in general and that of the state politics in particular. The editors and publishers must be complimented for producing this useful and elegant volume which is available at an affordable price.