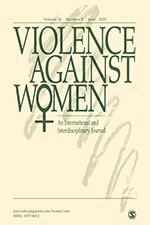 Unravelling the Threat of Violence

The problem of violence against women manifests itself in a terrifying array of forms throughout the world. The experience of violent intrusion - or the threat of such intrusion - is a common thread in the fabric of women's everyday lives in societies around the world.

As an international journal, one of the goals of Violence Against Women is to unravel that thread by shedding light not only on forms of violence that are already widely discussed but also on lesser known forms of violence, such as dowry murders, female circumcision enslavement for sex tourism, and rape as a weapon of war. Topics recently covered in the journal have included: Sexual Assault/ Coercion Domestic Violence Hate Crimes Corporate Violence Wife Rape Pornography Acquaintance Rape Lesbian Battery Female Sexual Abuse Sexual Harassment

Efforts to deal with the crisis of violence against women, in its many forms, have been fragmented by the boundaries of academic disciplines, professional allegiances, and increasingly, credentialism. Academics and clinicians are speaking to those most like themselves in relatively closed groups, not hearing the numerous voices that need to be heard if we are to develop a full understanding of the problem and a comprehensive strategy for addressing it. A primary goal of this journal, therefore, is to foster dialogue among those working in various fields and disciplines, as well as in agencies and other settings, and among those from diverse backgrounds in terms of ethnocultural and racial identity, sexual orientation, and experiences of victimisation/ survivorship.

Launched in March 1995, is a peer-reviewed scholarly journal that focuses on gender-based violence against women in all forms and across cultural and national boundaries, publishing a wide range of articles, including:

Violence against Women is an international, interdisciplinary journal dedicated to the publication of research and information on all aspects of the problem of violence against women. The journal assumes a broad definition of violence; topics to be covered include, but are not limited to, domestic violence, sexual assault, incest, sexual harassment, female infantcide, female circumcision, and female sexual slavery.

Manuscripts should be submitted electronically to http://mc.manuscriptcentral.com/vaw. Articles should be typewritten, double-spaced, with footnotes, references, tables, and charts on separate pages, and should follow the Publication Manual of the American Psychological Association (7th edition). Manuscripts will be sent out anonymously for editorial evaluation. Each article should begin with an abstract of about 100 words. The page limit is 35 double-spaced pages, inclusive of notes, references, tables, etc.
Obtaining permission for any quoted or reprinted material that requires permission, and paying any and all associated fees, is the responsibility of the author. Submission of a manuscript implies commitment to publish in the journal. Authors submitting manuscripts to the journal should not simultaneously submit them to another journal, nor should manuscripts have been published elsewhere in substantially similar form or with substantially similar content. Authors in doubt about what constitutes prior publication should consult the Editor claire.renzetti@uky.edu.

Please be aware that SAGE has no affiliation with SPi and makes no endorsement of the company. An author’s use of SPi’s services in no way guarantees that his or her submission will ultimately be accepted. Any arrangement an author enters into will be exclusively between the author and SPi, and any costs incurred are the sole responsibility of the author.

If you or your funder wish your article to be freely available online to nonsubscribers immediately upon publication (gold open access), you can opt for it to be included in SAGE Choice, subject to the payment of a publication fee. The manuscript submission and peer review procedure is unchanged. On acceptance of your article, you will be asked to let SAGE know directly if you are choosing SAGE Choice. To check journal eligibility and the publication fee, please visit SAGE Choice. For more information on open access options and compliance at SAGE, including self/author archiving deposits (green open access) visit SAGE Publishing Policies on our Journal Author Gateway.