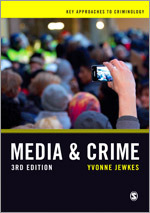 This book critically examines the complex interactions between media and crime.

Written with an engaging and authoritative voice, it guides you through all the key issues, ranging from news reporting of crime, media constructions of children and women, moral panics, and media and the police to 'reality' crime shows, surveillance and social control.

This is essential reading for your studies in criminology, media studies, cultural studies and sociology.

The Key Approaches to Criminology series celebrates the removal of traditional barriers between disciplines and, specifically, reflects criminology’s interdisciplinary nature and focus.  It brings together some of the leading scholars working at the intersections of criminology and related subjects.  Each book in the series helps readers to make intellectual connections between criminology and other discourses, and to understand the importance of studying crime and criminal justice within the context of broader debates.

The series is intended to have appeal across the entire range of undergraduate and postgraduate studies and beyond, comprising books which offer introductions to the fields as well as advancing ideas and knowledge in their subject areas.

Theorizing Media and Crime
The Construction of Crime News
Media and Moral Panics
Media Constructions of Children: 'Evil Monsters' and 'Tragic Victims'
Media Misogyny: Monstrous Women
Police, Offenders and Victims in the Media
Crime Films and Prison Films
Crime and the Surveillance Culture
The Role of the Internet in Crime and Deviance
(Re)Conceptualizing the Relationship between Media and Crime

In Media and Crime one of the field’s very best scholars offers a critical panorama of crime and media, from prison films to surveillance culture and cybercrime. As intellectually sophisticated as it is narratively engaging, Yvonne Jewkes’ Media and Crime is a masterful must-read.

Yvonne Jewkes' Media & Crime has established itself as the key text in this important area of criminology. This new edition incorporates pivotal developments in a rapidly transforming media landscape, and will prove an invaluable resource for criminology students and researchers alike.

A clear &amp; concise insight into the Media impact on crime and the fear of crime in the UK

Crucial addition to the reading list for this unit.

Covers a wide range of issues regarding merdia and crime and does so in an interesting way, providing good case studies as examples.

An intelligent appraisal of the tangled relationship between the media and crime with an impressive focus on key issues stemming from the rise of digital technology. An excellent resource.

Good overview of several issues and quite readable for undergrads

This text gives a comprehensive overview of the key themes and perspectives around media, crime and culture. Students find it an accessible and logically structured introduction to the main ideas and concepts.

Excellent all round book on Media and Crime

Media and Crime in the U.S.