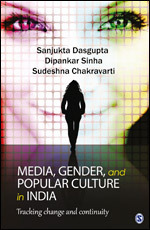 Share
Courses:
Media, Culture & Society
December 2011 | 232 pages | SAGE Publications Pvt. Ltd
Download flyer
In contemporary India, as one side of the coin celebrates traditional stereotypes, the other side subverts the same image, sometimes subtly, but often radically. The push and pulls of these factors are changing the cultural landscape of India decisively.

This volume critiques media representations of popular culture and gender since the 1950s and tracks the changes that have taken place in Indian society. The authors give us incisive analyses of these transformations, represented through the candid lens of the camera in films, television, advertisements and magazines, all of which focus on gender and familial representations and patriarchal norms in Indian society.

The strength of this book is that it rejects grand narratives in favor of the micro-politics of daily living. In the course of exploring the metamorphosis of India, the authors succeed in dissolving the boundaries between mass/low culture, elite/high culture and local/national/global affiliations.

The book has in detail captured trends in print, films and advertising. These are supported with fairly rich referencing from articles and journals throughout. Media, Gender, and Popular Culture in India will be of more interest and use to students, especially those studying arts or mass communication.

[The book] has succeeded in dissolving the boundaries between mass/low culture, elite/high culture and local/national/ global affiliations.... The book is very interesting to read and at the same time quite thought-provoking too. One strongly recommends this book for anyone who is interested in tracking the role of change and continuity in the Indian media.