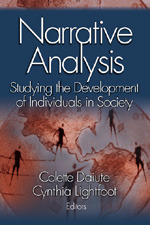 Editors Colette Daiute and Cynthia Lightfoot have brought together an internationally renowned team of experts in narrative analysis to create a volume perfect for qualitative researchers in sociology, psychology, social work, education, and anthropology. Students, professors, and experienced researchers will find the pedagogical elements and case studies perfect for course use and professional reference.

Case study examples offer a wide range of research contexts and goals, including:
Narrative Analysis is organized around three approaches or "readings." Literary Readings focus on aesthetic, metaphorical, and other literary qualities inherent to narrative approaches. Social-Relational Readings build upon the idea that narrative discourse is personal but also echoes political, economic, and other material relationships in the environment. Readings through the Force of History explain how narrators come to know themselves and their worlds in terms of and in spite of the received explanations of time and place. Working in a range of ethnic, geographic, generational, class, and institutional communities, the authors demonstrate how they have used narrative inquiry to explore development in challenging social contexts.
Editors' Introduction
Colette Daiute and Cynthia Lightfoot
Theory and Craft of Narrative Analysis
Literary readings
Preface to Literary Readings
Theodore Sarbin
The Role of Imagination in Narrative Constructions
Cynthia Lightfoot
Fantastic Self: A Study of Adolescents' Fictional Narratives, and Identity Work as Aesthetic Activity
Carol D. Lee, Erica Rosenfeld, Ruby Mendenhall, Ama Rivers and Brendesha Tynes
Cultural modeling as a frame for narrative analysis
Mark Freeman
Data are everywhere: Narrative criticism in the literature of experience
Social-relational Readings
Preface to Social-relational Readings
Katherine Nelson
Co-constructing the cultural person through narratives in early childhood
Colette Daiute
Adaptive and Creative Uses of Narrative Genres
Michael Bamberg
Positioning with Davie Hogan: Stories, Tellings, and Identities
Steven Stanley and Michael Billig
Dilemmas of storytelling and identity
Readings through the forces of history
Preface to Readings through the forces of history
Jocelyn Solis
Narrating illegality as an identity in conflicting cultural discourses
Sarah Carney
Transcendent stories and counter-narratives in holocaust survivor life histories: Searching for meaning in video-testimony archives
Abigail J. Stewart and Janet E. Malley
Women of "the greatest generation": Feeling on the margin of social history
Michael Chandler, Ulrecht Teucher, and Chris Lalonde
Culture, continuity, and the limits of narrativity: A comparison of the self-narratives of
Native and Non-Native youth
Mary Gergen
Once upon a time: A narratologist's tale
Editor and Author Bios
Editor and Author Bios

"As qualitative research methods have gained status, interest in narrative analysis has also grown. This collection of essays reflects varying definitions for processes of interpreting variety of discourse as well as varying contexts of meaning. The editors highlight the usefulness of narrative analysis as a way to reveal relationships between individuals and societies. They also emphsize the developmental qualitites of narrative analysis: in terms of life journey, cultural tool over time, complexity, and skill acquisition."

Too complex for undergraduate students but excellent resource for supervising PhD students.

An interesting approach for those students who wish to focus on narrative in their qualitative studies.

This an extremely helpful text for students who are using this methodology. Very useful casestudies that demonstrate application.

Very good for those looking at people rather than society

An additional text for developing an understanding of analytic strategies

An interesting collection of essays, focussing more on human development of the narrative technique. Would probably be most useful for anthropologists and cultural studies as it takes a very literary view. It's not as relevant for my course on health/illness experiences but has some useful sections on, for example, storytelling and identity.

The case studies in this book made it very engaging and really illustrated the key points in the text.

I will recommend this to some of the MA in Career Guidance students - but I have found it interesting and stimulating for my own research.

This title is also available on SAGE Research Methods, the ultimate digital methods library. If your library doesn’t have access, ask your librarian to start a trial.