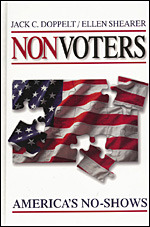 "The raffish epigraphs of a comic, George Carlin, and a poet, W.B. Yeats, set the tone for this exciting, revelatory and altogether important work. The question: Why are there so many no-shows on Election Day? Thirty thoughtful Americans-as good a cross section as you can get-tell us in a varied and astonishing manner."

"So much has been said (with so little knowledge) about America's nonvoting majority. This intriguing book at last introduces us to the people who do not vote, dispels many of the myths about them, and shows us the depth of their disconnection from the political process. Through their revealing interviews and compelling conclusions, Jack C. Doppelt and Ellen Shearer illuminate the varied reasons that so many Americans find so little meaning in politics. Nonvoters shows us the futility of current efforts to woo nonvoters; it also enables us for the first time to understand how complex and deep-seated this important issue is."

"Fascinating and important. This book gives us new and significant insights."

"Jack C. Doppelt and Ellen Shearer have brought the energy and open minds that mark the best reporters to look at the other half, at the 51% majority of the electorate who chose to stay away from the polls in 1996. They found "a Pandora's box of dueling realities" that call into question the easy assumptions about nonvoters—that they're low-income, poorly educated, and generally uninformed. The reality turns out to be considerably more complicated. The authors and their dispersed across the country to talk to the nonvoters themselves. Their voices ring through this thoughtful book." -Susan Page, White House Bureau Chief, USA TODAY, and President, White House Correspondents' Association

In Nonvoters: America's No-Shows, Doppelt and Shearer reveal the findings of their national survey and interviews with nonvoting Americans. Though they discovered a diverse array of opinions and reasons for not voting, they also found that nonvoters clustered into five types: "doers," "unpluggeds," "irritables," "don't knows," and "alienateds." This book contains the stories of the people who don't vote as well as the authors' analyses of this troubling phenomenon in American politics. The authors consider voting behavior in local, off-year, and presidential elections, debunking the myths of why the majority of Americans decide to be "no shows" on election day. This groundbreaking study and insightful perspectives of 30 representative nonvoters will prove fascinating to anyone interested in politics and human behavior, whether as part of a campaign's dialogue, a classroom study, or a living room discussion.

"Meet your nonvoting neighbors. Some of them are thoughtful, caring, and involved in community life. More are poor and young, stressed and strapped. Many have expectations of politics so absurdly high that they write off any politician who is not a saint or understanding of parties and political institutions so drastically low that they cannot follow even the basics of a political campaign. Doppelt and Shearer offer an honest, humane, and disturbing account of how the other half thinks and feel sabout the right to vote, and then lays it aside."

Michael Schudson
Author of The Good Citizen: A History of American Civil Life