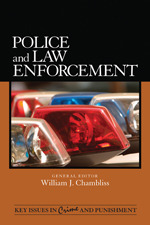 From its beginnings in England as a constabulary, intended only to keep the peace rather than to make arrests, policing has had a tumultuous, controversial history. The police represent an essential law enforcement entity to some, while others see police officers as often corrupt, prone to unfair racial profiling, and quick to use unnecessary force.

Police and Law Enforcement examines many aspects of policing in society, including their common duties, legal regulations on those duties, problematic policing practices, and alternatives to traditional policing. Topics in this volume include such hotly debated topics as accountability, arrest practices, bounty hunters, entrapment, Miranda warnings, police privatization, profiling, vigilantes, and zero-tolerance policing. The 20 chapters present the most hotly contested debates and offer solutions to potential and perceived problems.