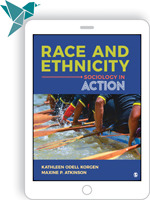 
Please note that this is an instant-access product. Once you complete your purchase, you will not receive or need an access code. If you’ve previously accessed SAGE Vantage via your LMS and/or initiated a grace period, this purchase will be applied directly to your account when you log in to SAGE Vantage.

Within a few minutes of completing your order, you will receive two (2) emails as follows: a confirmation email (Your order has been received) and an email with additional instructions on how to access your product (Your SAGE Vantage order is ready). Be sure to check your spam folder and adjust filter settings if you do not receive these emails.

Watch this 90-second video and see how it works:

About Race and Ethnicity

Wake up your race and ethnicity classes! Race and Ethnicity: Sociology in Action helps your students learn sociology by doing sociology.

Race and Ethnicity: Sociology in Action provides all the elements required to create an active learning experience for this course. Inspired by the best-selling Sociology in Action for introductory sociology, this innovative new title emphasizes hands-on work, application, and learning-by-example. The text features a diverse group of expert contributing authors who also practice active learning in their own classrooms. Each chapter explains key concepts and theories in race and ethnicity and pairs that foundational coverage with a series of carefully developed learning activities and thought-provoking questions. The comprehensive Activity Guide that accompanies the text will help you carry out and assess the activities that will best engage your students, fit the format of your course, and meet your course goals.
Chapter One: Looking at Race and Ethnicity—and Power
Chapter Two: Identifying Racism throughout United States History
Chapter Three: Recognizing Systemic Racism is a Global Issue
Chapter Four: Institutional Supports for the Racial Hierarchy in the U.S.
Chapter Five: Cultural Supports for Systemic Racism in the US
Chapter Six: Surviving Genocide: American Indians and Alaska Natives
Chapter Seven: Defining and Attaining Whiteness
Chapter Eight: Facing Slavery and Fighting for Justice: Black Groups
Chapter Nine: Forever Foreigners?: Asian American Ethnic Groups
Chapter Ten: Reconstructing Presence: Hispanics and Latinxs in the United States
Chapter Eleven: Groups in the U.S. Facing Ethnocentrism
Chapter Twelve: Erasing or Reordering Racial Lines? Interracial Marriage and Multiracial Americans
Chapter Thirteen: How Do Racism and the Racial Hierarchy Hurt Everyone?
Chapter Fourteen: Dismantling Systemic Racism

For additional information, custom options, or to request a personalized walkthrough of these resources, please contact your sales representative.

LMS cartridge included with this title for use in Blackboard, Canvas, Brightspace by Desire2Learn (D2L), and Moodle

The LMS cartridge makes it easy to import this title’s instructor resources into your learning management system (LMS). These resources include:

Don’t use an LMS platform?

You can still access all of the same online resources for this title via the password-protected Instructor Resource Site.

The open-access Student Study Site makes it easy for students to maximize their study time, anywhere, anytime. It offers flashcards that strengthen understanding of key terms and concepts, as well as learning objectives that reinforce the most important material.
Student Study Site

The open-access Student Study Site makes it easy for students to maximize their study time, anywhere, anytime. It offers flashcards that strengthen understanding of key terms and concepts, as well as learning objectives that reinforce the most important material.

Before purchasing, make sure your instructor assigned this title.

This product is not yet available for purchase.