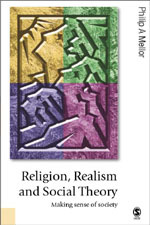 Share
Series:
Published in association with Theory, Culture & Society
Courses:
Sociology of Religion
October 2004 | 224 pages | SAGE Publications Ltd
Download flyer Recommend to Library
`Philip Mellor's ambition is to save sociology from itself…or to save society from the sociologists. He has written a brilliant polemic and theoretically rich argument against the many fashionable contemporary social theories that provide acquiescent 'post-societal' endorsements of the economic and technological forces that are 'hollowing out' the religious, moral and human dimensions of societies. I am tremendously impressed' - Kenneth Thompson, Professor of Sociology at the Open University

Religion, Realism and Social Theory challenges those contemporary sociologists who argue that the notion of 'society' is an outmoded basis for sociological analysis and instead revitalizes the idea that sociology is truly 'the study of society'.

Through a bold and original argument, Philip Mellor returns the human and religious aspects of social life to the centre of social theory, drawing on a vast range of contemporary social theoretical literature in the process. The book:

" comprehensively reassesses what societies are

" offers a detailed critique of current failings in social theory

" draws out the religious underpinnings of social life

" throws fresh light on the religious, cultural and social conflicts that appear to herald a new period of global disorder

Religion, Realism and Social Theory will stimulate debate amongst academics and students of sociology and social theory, cultural studies and the sociology of religion.

Sociology of the Sacred

The SAGE Encyclopedia of the Sociology of Religion

The Sociology of Religion

The Sociology of Religion