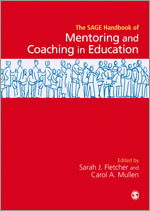 This Handbook is a leading source of ideas and information on mentoring and coaching. It covers national and international research on schools, higher education, and disciplines within and beyond education. The editors draw together contributions and present evidence bases and alternative worldviews in which concepts are both untangled and substantiated. Unique in its coverage, it maps current knowledge and understanding, and values and skills underpinning educational mentoring and coaching for learning. Contributors set out practical applications of coaching and mentoring for practitioners and researchers and also address social justice issues, such as those involving traditional and technical forms of mentoring and coaching, democratic and accountability agendas, and institutional and historical patterns of learning.

'I cannot think of a more comprehensive treatment of mentoring and coaching within national and international contexts than this book co-edited by Sarah Fletcher and Carol Mullen. The chapter authors have impressive scholarly and practice based knowledge and experience. This book can be used in so many different ways because of its extensive and in-depth analyses and discussion that I recommend it as a "must read"
-Fenwick W. English, R. Wendell Eaves Senior Distinguished Professor of Educational Leadership, School of Education, University of North Carolina at Chapel Hill

'The Sage Handbook of Mentoring and Coaching is an outstanding collection of cutting edge theory, research and practice in mentoring and coaching. It draws together an impressive international community of scholars and is edited by Sarah Fletcher and Carol Mullen, two leading lights in the field. It is a must read for academics, practitioners and graduate students not only for its comprehensive content but also for its ability to provide alternative viewpoints and raise a host of critical contemporary issues that impact upon mentoring and coaching within educational contexts'
-Prof Lisa Ehrich, School of Learning & Professional Studies Queensland University of Technology