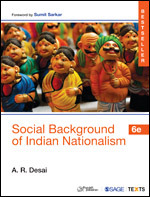 Employing the method of historical materialism to an analysis of Indian history of the nineteenth and twentieth centuries, the author has been able to single out and assess various forces that have contributed to the massiveness of nationalistic influence. This is virtually the only book that provides such a comprehensive and systematic account of the genesis of Indian nationalism and national consciousness. It has justly earned itself a valuable place in sociological literature.

This edition carries a foreword written by the noted historian Sumit Sarkar.