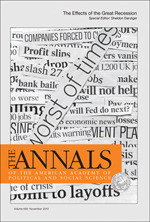 The Great Recession, which lasted from December 2007 through June 2009, was the most severe recession since the Great Depression. The gross domestic product (GDP) and job opportunities declined, houses fell into foreclosure, and those employed watched as income dwindled. Plunging stock prices and home values caused deep economic fractures that had far-reaching effects. While the Great Recession may be officially over, its lingering effects on social and economic well-being will be felt for years to come.

In this volume of The ANNALS, experts in political science, economics, psychology, and sociology shed light on the course and outcome of the Great Recession as a result of federal and state government policies and how the recession has affected the lives of Americans. They outline how monetary and fiscal policies enacted because of the Great Recession shaped its development, both positively and negatively, and how the public reacted to them when it came time to vote in elections. Authors explore the recession’s benefits, such as higher enrollment in higher education, improved health in some areas, and strong family support for those affected by the recession. On the other hand, many of the authors predict possible long-term consequences, such as negative effects on child development and retirement security.