Book > Major Work > Urban Planning
SAGE online ordering services will be unavailable due to system maintenance on August 12th at 18:00 pm Pacific / 21:00 pm Eastern time. Thank you for your patience and we apologize for the inconvenience. 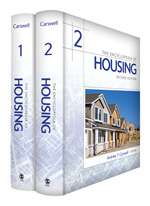 Share
June 2012 | 928 pages | SAGE Publications, Inc
Download flyer
Since publication of the groundbreaking Encyclopedia of Housing in 1998, many issues have assumed special prominence within this field and, indeed, within the global economy. For instance, the global economic meltdown was spurred in large part by the worst subprime mortgage crisis we've seen in our history. On a more positive note, the sustainability movement and "green" development has picked up considerable steam and, given the priorities and initiatives of the current U.S. administration, this will only grow in importance, and increased attention has been given in recent years to the topic of indoor air quality. Within the past decade, as well, the Baby Boom Generation began its march into retirement and senior citizenship, which will have increasingly broad implications for retirement communities and housing, assisted living facilities, aging in place, livable communities, universal design, and the like. Finally, within the last twelve years an emerging generation of young scholars has been making significant contributions to the field. For all these reasons and more, we are pleased to present a significantly updated and expanded Second Edition of the Encyclopedia of Housing.

This excellent work will continue to be a primary resource for researchers needing in-depth information and the general reader who is interested in core housing topics and issues. VERDICT … An essential purchase.

The Encyclopedia of Housing is highly recommended for academic and technical institutions, and it will be indispensable for those with architecture, construction, urban-planning, and human-ecology programs.

This will clearly serve as a standard reference for many years to come in the field of housing. It is easy to see recurring usefulness for these volumes both for teachers and professionals in the field. Students will be well served by the accessibility and understandable language of these brief entries. Consequently, the book is highly appropriate both for those working within the field and for public libraries containing general reference material.

"The second edition of The Encyclopedia of Housing is a timely update for housing research after the recent economic turmoil and mortgage crisis in the United States....With recent developments and the change in economic conditions over the past fifteen years, the updated content is pertinent and thought provoking....Overall, the contemporary content, multidisciplinary perspectives, and improved usability make The Encyclopedia of Housing a quality reference resource for college and university libraries. Even if your institution owns the first edition, I recommend updating the collection with the second."