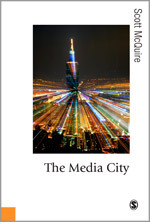 Share
Series:
Published in association with Theory, Culture & Society
Courses:
Media & Society | Urban Sociology
June 2008 | 240 pages | SAGE Publications Ltd
Download flyer
Significant changes are occurring in the social spaces of modern cities and the social functioning of media. This erudite, forceful book argues that the spaces and rhythms of contemporary cities are radically different to those described in classic theories of urbanism. Changes in the city have been paralleled by the transformation of media which has become increasingly mobile, instantaneous and pervasive. The media are no longer separate from the city. Offering social commentary at the deepest levels of historical and critical reference, The Media City links Myspace to Howard Hughes; trams to cinema; security cameras to exploding buildings; reality TV to Marx; and Lenin on privacy to Kracauer on the mass ornament.

Wide-ranging and richly illustrated, it intersects disciplines and connects phenomena which are too often left isolated from each other to propose a new way of understanding public and private space and social life in contemporary cities.

It will find a broad readership in media and communications, cultural studies, social theory, urban sociology, architecture, and art history.

If only more new media commentators had this level of historical-critical reference, engaging, good stories, and a degree of wonder at what media and windows bring to the city, to life...
John Hutnyk
Academic Director, Centre for Cultural Studies, Goldsmiths University of London

Just when you thought the last word had been said about cities and media, along comes Scott McQuire to breathe new life into the debate. When revisiting existing pathways, his always ingenious eyes produce startling and original insights. When striking out into new territory, he opens up before us inspiring new vistas. I love this book
James Donald
Professor of Film Studies, University of New South Wales

A book that contains sometimes audacious segues, that crams into a single chapter more insights and illustrations than seems feasible, yet which ties all threads together through a consistent, theoretically rich analysis of the interplay of media and city... Writing with effusiveness uncharacteristic of back-cover blurbs on academic tomes, James Donald says "I love this book". But I will end by echoing his praise, and make a promise to readers: you will love The Media City, too
European Journal of Communication

Compared to the urban studies literature of say David Harvey or Ed Soja, McQuire writes with a much greater architectural sensibility. His argument is that we move from a rather centred space of the classical renaissance city to a 'relational space' where past and future are juxtaposed not in simple Newtonian chronology but in complex relation to present. Such a transformed urbanism and media (compared with say Renaissance and Beaux Arts perspective) moves from what might be seen as the panoptic to a serial succession of photographic shots, of film frames, of movements along vistas at speed.

At stake is a city that is continually redefined by the media and understood along the lines of McQuire's quite novel media theory. At stake is a vision of media, which are too ubiquitous in the multiplication of screens, surveillance and other devices/interfaces in private and public space to primarily function any more as representations. Media in this (McQuire's) context are no longer primarily a set of representations, but constitute the very substance and fabric of urban public and private space
Scott Lash
Goldsmiths, University of London

…refreshingly clear, getting to grips with some of the key concepts of urban sociology in a way that moves beyond the wistful evocation and splatter of undigested terms that characterises so much academic writing on culture and cities… a clear historical and theoretically informed look at the city over the last 200 years… give us one of the most cogent accounts we have had for some time
Media, Culture & Society

[A]n in-depth analysis that draws upon a melange of psychoanalytical, sociological and cultural theory... The Media City is undoubtedly an accomplished work and offers a substantial piece of scholarship
Information, Communication and Society

Introduction to Urban Development and Planning