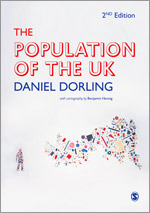 This new edition of The Population of the UK explains how geography - in the widest sense - makes a difference to life outcomes. Fully revised and updated, and now printed in four color, the text explains differences in key socio-economic variables - like education, health, and work - that map the UK's inequalities and affect everyone's lives.

Written for undergraduate students in all social science disciplines, this unique text presents a social geography and landscape of the UK which is distinctive in three ways:

Highly visual – with maps and figures on every page, using the most up to date cartographic techniques – organized in short thematic chapters, The Population of the UK explains the nuts and bolts of UK population in comparative context.

Fully revised and expanded, in four-color and in a large format, The Population of the UK includes 100 figures and a fully functioning web-site with PowerPoint slides; as well as practical exercises, and clear summaries in tables and specially drawn maps.

You will be encouraged to build your own alternative theories of social policy and human geography. For that is what Daniel Dorling has done: build a documented story that questions many standard interpretations and identifies new ways of seeing the world
Ludi Simpson
President of the British Society of Population Studies and Professor of Population Studies, The University of Manchester

Danny Dorling has already established himself as our leading human geographer - and a doughty fighter for a more just society. This book will provide readers with a powerful and new way of understanding the shape of their country, and how their country shapes them
Matthew Taylor
Chief Executive, RSA

Dorling has written an excellent book using statistics and maps to cast light on what it means to live in the UK today. This is engaging and thought provoking material for any reader, and especially for students
Hetan Shah
Executive Director, The Royal Statistical Society

This is a book demanding action in a number of ways. It is commendably rich in quantitative evidence, but the author claims that it is not purely objective: he sets out his interpretation of the data in the context of his own railing against inequalities. The evidence is a call to arms against inequality's human origins. We can do better, he says: just look at the abstentions in voting patterns. We can do better: which social policies would you pursue as an MP (or next time you vote for one)? We can do better: how will you use geographical data to help change people's minds?

The 2011 census results were being released as the book was being published. They provide plenty of scope for students to check out and update Dorling's social patterns of the UK. This is a book that encourages by example a do-it-yourself approach to data analysis in human geography, emphasising the analyst's own responsibility to display evidence clearly, to openly construct interpretations of data, and to focus on human responsibility for maintaining or changing those patterns.

This book is recommended for all of my HNC/D students its gives a learner an understanding of the shape of the UK in contemporary society. This book helps learners to visualise evidence in a meaningful way. The book highlights and uses up to date statistics. This is a must for social science students this books cover so many topics essential for social science learners such as, birth education identify health politics contrasting home and abroad. A jolly good read !

This book provides a very useful examination of demographic data informed by 2001 National Census statistics. However, the data could have been enhanced by providing more than just an overview of ethnicity and demography.

As a non-UK academic beginning work in a UK university this book offered me a useful overview of key demographic changes on issues such as health, education, work, identity and inequality in the UK.

Although the content is useful for learning and research, this would be at a higher level and more in depth than the students are required to cover.

This text has been ordered for essential reading lists in Year 2 and year 3 courses which cover inequality, identity and culture.

This book is extremely useful as a quick overview of the topic, especially for students with limited prior exposure to geography and statistics. It has proven quite valuable as a cheap and readable background text on spatial distribution of poverty.

Just a wonderfully refreshing way at looking at social policy with the benefit of cartography. Gives a wider dimension to understanding inequalities!

Social Inequality in a Global Age

What Do We Know and What Should We Do About Inequality?

Political Economy of Caste in India

What Do We Know and What Should We Do About Social Mobility?
Show More Show Less