Book > Major Work > Presidency
Due to global supply chain disruptions, we recommend ordering print titles early.
SAGE online ordering services will be unavailable due to system maintenance on June 26th at 8:30 pm Pacific / 11:30 pm Eastern for 30 mintues. Thank you for your patience and we apologize for the inconvenience. 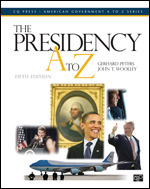 The one-stop reference on all aspects of the U.S. presidency, The Presidency A to Z, Fifth Edition is an authoritative and accessible volume providing all the basic information readers need to understand the executive branch. This new and extensively revised fifth edition features important new entries on Barack Obama, Michelle Obama, John McCain, Guantanamo Bay, and War in Afghanistan. It also includes updated entries on Campaign Finance, Iraq War, Presidents' relationship with Congress, and many more.

More 300 comprehensive, easy-to-read entries offer quick information and in-depth background on how the executive branch has responded to the challenges facing the nation. Readers will find:

·         Biographies of every president and many others important to the office

·         Explanations of broader concepts and powers relating to the presidency

·         Discussions of relations with Congress, the Supreme Court, the bureaucracy, political parties, the media, interest groups, and the public

·         Exploration of the policies of each president and their impact on U.S. and world history