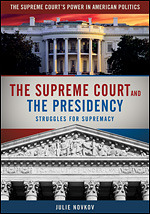 The Supreme Court and the Presidency: Struggles for Supremacy

This newest edition to The Supreme Court’s Power in American Politics series explores and analyzes the dynamic alliances and tensions between the nation’s chief executive and the Court over time. Through primary source and other documents and insightful narratives, this work discusses appointments, prerogative governance, and the role of time and regimes in the complex scheme of checks and balances.  Featured topics include: