Book > Major Work > Law & Courts
Due to global supply chain disruptions, we recommend ordering print titles early.
SAGE online ordering services are currently unavailable due to system maintenance on May 14th from 9:15 am to 12:30 pm Pacific time. If you need assistance, please contact orders@sagepub.com. Thank you for your patience and we apologise for the inconvenience. 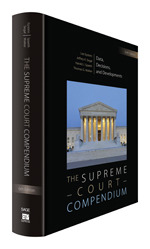 Share
July 2015 | 872 pages | CQ Press
Download flyer
The Supreme Court Compendium provides historical and statistical information on the Supreme Court: its institutional development; caseload; decision trends; the background, nomination, and voting behavior of its justices; its relationship with public, governmental, and other judicial bodies; and its impact.  With over 180 tables and figures, this new edition is intended to capture the full retrospective picture through the 2013-2014 term of the Roberts Court and the momentous decisions handed down within the last four years, including United States v. Windsor, National Federation of Independent Business v. Sebelius, and Shelby County v. Holder.

“This is a valuable resource, but will be best used by those seeking comparative information on specific topics. Recommended for large public, academic, and law libraries."

"This work provides a remarkably eclectic range of charts, data, and statistics, including longitudinal analyses of the court and its members.  The four academic editors were diligent in their updating, fully rewriting source notes to conform to the naming conventions of the Supreme Court Database (CH, May'10, 47-4801)... For including much original research—superbly organized and indexed—in easy-to-read type and firmly bound with durable paper, the work merits superlative praise reserved for the best in reference-book publishing... Summing Up: Essential. All libraries/levels."