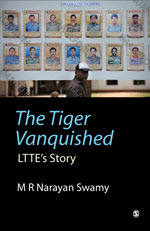 Share
July 2010 | 276 pages | SAGE Publications Pvt. Ltd
Download flyer
This book tells the story of why the Liberation Tigers of Tamil Eelam (LTTE) lost the war that they had always dreamt of winning in Sri Lanka. It is a collection of news stories and commentaries penned by the author from 2003 to 2009 on the ethnic conflict in the country. Each piece is provided with an introduction that places it in the context in which it was written. The unfolding of the drama is brought about through conversations with Sri Lankan leaders, Tamil activists, Indian officials, Norwegian and other diplomats, human rights activists, former LTTE guerrillas and civilians.

It is an essential read for anyone trying to get his intellectual keel on extremist philosophy. At a time when even the most pacifist of thinkers cannot imagine a world without a war between ‘good’ and ‘evil’ , and ‘civilization’ and ‘medievalism’ , it is good to read about a group that started it all.

The Tiger Vanquished comes as a fitting finale of a trilogy that can be rated as the finest collective reference guide to the devastating three-decade-long war in Sri Lanka’s north and east.

The book is a well researched study of the rise and decline of Prabhakaran and his Tamil Tigers.