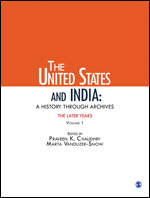 Declassified documents arguably offer a premier vantage for understanding global governance, current security concerns, and the international market. The United States and India: A History through Archives provides a comprehensive view of world politics, defining the United States and India as major actors. While the first volume dealt with India–US bilateral relations during the 'Formative Years', this volume (a set of two books) focuses on the 'Later Years': the Dwight D. Eisenhower–Richard M. Nixon years (1965–1972), when cold war politics had set in, and cold war alliances were evolving in both blocs.

The Later Years comprise two books which deal with the effects of the Cold War on India–US relations as well as on Indian domestic politics. It focuses on that period in Indian history when India's domestic politics went through significant instability arising from faltering left–right–center coalitions and challenges to parliamentary system norms, and from volatile regional relations with neighboring Pakistan and China. It, thus, presents a comprehensive account of the private and political interactions which shaped a very critical period in world history.