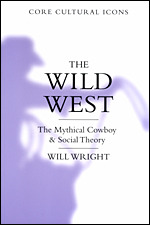 Share
August 2001 | 206 pages | SAGE Publications Ltd
Download flyer
"In this ingenious new book, Wright offers an introduction to the theory of capitalist market individualism – from social contract theory via Adam Smith, Marx and Weber all the way to Keynes – by analyzing its projections in the myths of the frontier and the Western. The comparison is most illuminating, both for the reality and its ideology. Wright's valuable filmographies make this an excellent teaching instrument" – Professor Fredric Jameson, Duke University, Durham, North Carolina "To begin with, The Wild West is a lucid introduction to social and political theory, a book I'd recommend to any student. But then it is also a witty meditation on the continuing power of Wild West mythology. Wright reverses the usual argument: he doesn't use sociology to explain the cowboy but, brilliantly, uses the cowboy to explain sociology. And, in the end, this is really a book about the USA, showing why a country rooted in European thought is so peculiar for Europeans – in its violence and its heroism, its destructiveness and optimism, in its racism and generosity" – Professor Simon Frith, University of Strathclyde, Glasgow, U.K. This book, written by the author of the celebrated volume Six Guns and Society, explains why the myth of the Wild West is popular around the world. It shows how the cultural icon of the Wild West speaks to deep desires of individualism and liberty and offers a vision of social contract theory in which a free and equal individual (the cowboy) emerges from the state of nature (the wilderness) to build a civil society (the frontier community). The metaphor of the Wild West retained a commitment to some limited government (law and order) but rejected the notion of the fully codified state as too oppressive (the corrupt sheriff). Compelling and magnificently suggestive, the book unpacks one of the core icons of our time. It is a unique discussion of market and social theory using cultural myth. Will Wright fully explores how issues of individualism, freedom and inequality in the myth of the Wild West connect up with questions of white, male superiority and environmental degradation
Introduction
The Individualist Cowboy
PART ONE: INDIVIDUALISM
The Social Contract
`Natural' Individuals
The Invisible Hand
PART TWO: INDUSTRIAL PROBLEMS
Marx
The Revolutionary and the Cowboy
Weber
Bureaucracy and the Cowboy
Durkheim
Endless `Frontiers'
PART THREE: MYTHICAL INSIGHTS
Separating the Women
Removing the Indians
Sustaining the Wilderness
Conclusion
The Wild Individualist West

"In this ingenious new book, Wright offers an introduction to the theory of capitalist market individualism – from social contract theory via Adam Smith, Marx and Weber all the way to Keynes—by analyzing its propositions in the myths of the frontier and the Western. The comparison is most illuminating, both for the reality and its ideology. Wright’s valuable filmographies make this an excellent teaching instrument."