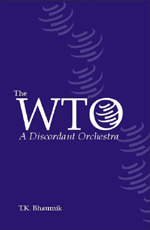 "This book is a useful recapitulation of all the interesting events and developments that the world has witnessed on the trade front since the establishment of the GATT back in 1948 until it was replaced by the WTO. Bhaumik explains highly complex issues in uncluttered non-technical jargon, ensuring that his book is useful for the lay reader and not just for academia."

Potentially one of the most powerful of all multilateral institutions in terms of ensuring smooth and free trade flows globally, the World Trade Organization (WTO) is also one of the most controversial. Its achievements notwithstanding, what significantly plagues the WTO are the conflicting objectives of its constituent members which act as a deterrent to progress. Therefore, it is time to conduct a stock-taking exercise and review the developments in the WTO since its establishment.

This book takes stock of the WTO and reviews its functioning since its establishment in 1995. It narrates the story of the WTO with a view to finding a solution to the unproductive conflicts hampering its functioning. The author ably captures the tensions within the WTO as also the developments which have given rise to these complex conflicts. While the author maintains that the biggest challenge facing the WTO is the North-South discord, he also highlights the frequent emergence of South-South and North-North conflicts.

The book presents a chronological description of developments within the WTO (till the most recent ministerial round at Hong Kong in November 2005) which have been shaped by the tug-of-war between various interest groups.

The book concludes by summing up the key issues and stresses that they need to be addressed and resolved in order to ensure effective multilateralism and a stronger WTO regime.

Providing an informed perspective on an issue that is of immense topical relevance, this book will be of interest to students and scholars of development studies, planning, and international relations. This book will also be useful to policy makers and those working in international development agencies.
Birth of the Prodigal GATT, Uruguay Round and the WTO
Unhappiness of the South
The Millennium Round
A Flop Show
Between Seattle and Doha
Putting Humpty Dumpty Together Again
Doha Negotiations
Phase I
Doha Negotiations
Phase II