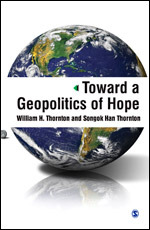 Share
Courses:
Leadership in Political Science
October 2012 | 276 pages | SAGE India
Download flyer
Toward a Geopolitics of Hope posits a world order marked less by univocal "globalization" than by a grating geopolitics of rival capitalisms. Now that China, Russia, and much of the undemocratic developing world have embraced capitalism, this new Second World can no longer be regarded as a fleeting phenomenon. Globalization turns out to be anything but the steadfast ally of democratization it purports to be. Indeed, the Western democratic experiment of the last two centuries is starting to look very tentative and parochial.

For this the West has nothing to blame but itself. In many respects the new Second World was spawned by First World neoliberal engagement. The Washington Consensus has not only brought the world to the brink of an intractable economic depression, but has played midwife to a chronic geopolitical crisis. Hope, however, is anything but defeatist in the face of this globalist impasse. It draws upon a host of non-Western reformisms—with special attention to those of India, Burma, and the Arab Spring—to forge a Global Third Way. Likewise its moral realism bridges the classic imperatives of Third World social justice and First World security. Its paramount goal is not just a new "soft power" politics, but a post-globalist geopolitics of hope.
Introduction-Second World Redux: The Case for Moral Realism
After the American Century: The De-Westernization of Globalization
Russia Turns East: Putinism and the Making of Kremlin Capitalism
The New China Model: Power through Political Underdevelopment
Tibet's Long Shadow: China, India, and the Cold War over 'Asian Values'
Tibet of the South: Burma as Geopolitical Testing Ground
Indo-Globalization: India and the Crisis of Asian Democracy
Race to the Bottom: Globalization with Chinese Characteristics
Freedom without Borders: Lessons of the Arab Revolt for the Globalist West
Conclusion The Search for a Post-Globalist Third Way
Index

A must-have on the reading list of an international relations theory academic, as it is for all foreign policy analysts and politicians. It is an incisive, thought provoking, and most certainly will hold much relevance in the theoretical conception and pragmatic reality of the world in times to come.