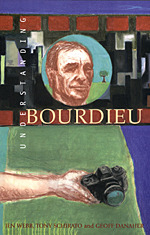 `A good range of recent examples from popular culture are used to flesh out the material in accessible terms. These examples are deployed very well indeed - rather than being tacked-on illustrations of an idea, they are instead used at the heart of the explanation of the ideas' - David Gauntlett, Leeds University

Now considered one of the most influential thinkers of the 20th century, Pierre Bourdieu has left his mark on most of the 'big' theoretical issues in the world of contemporary theory: gender, subjectivity, the body, culture, citizenship, and globalization. His terms are now commonplace: 'social capital', 'cultural capital', 'field', and 'habitus'.

Bourdieu examines how people conduct their lives in relation to one another and to major social institutions. He argues that culture and education aren't simply minor influences, but as important as economics in determining differences between groups of people. Unlike the other grand systematisers Marx and Foucault, Bourdieu has tested these arguments in detailed fieldwork. His range is eclectic, his vision is vast, and his writing is often dense and challenging.

Understanding Bourdieu offers a comprehensive introduction to Bourdieu's work. It is essential reading for anyone tackling him for the first time.

Bourdieu's work is formidable-the journey is tough. Follow this French foreign legion - take an apple, take a hanky - but take this book.

Pierre Bourdieu's work is now coming to be seen as one of the twentieth century's most important contributions to our thinking about the world. Understanding Bourdieu is a comprehensive and lucid introduction to his work. Measured and judicious, it's the best road map of this significant body of work currently available.

A good range of recent examples from popular culture are used to flesh out the material in accessible terms. These examples are deployed very well indeed - rather than being tacked-on illustrations of an idea, they are instead used at the heart of the explanation of the ideas.

Bourdieu's theory remains important, even though societies changes. However, his theory is not easily unlocked and applied in research. This book certainly helps in understanding Bourdieu by rephrasing his words into more open and transparent language.

This is a really useful book in understanding the work of Bourdieu. The glossary at the beginning of the book is especially helpful for anyone new to his work and the examples thought the chapters are relevant and contextualised. An interesting a useful guide.

Jon Audain
Faculty of Education, Health and Social Care, University of Winchester
May 25, 2014
Report this review

Align with the authors aims this is an accessible introduction to the thinking and theoretical considerations of Bourdieu. An audience of undergraduate students may find this book particularly useful in conceptualising and comprehending some of Bourdieu’s key thoughts. A convenient combination of Bourdieu’s original text, authors’ comments and relevant examples allows for a concise understanding of Bourdieu’s theoretical positioning. Pertinent references are provided at the end of each chapter for those wishing to further their understanding of often complex theoretical concepts.

A great 'starter' on the world of Bourdieu. Seriously thinking about the social world is never easy, but this book is a great introduction to Bourdieu's work.

This is for the second part of the module, which has not yet started, but where we will be exploring Bourdieu in depth.

This book offers a good background understanding of Bourdieu, and consequently, will be very helpful for students on this module.

I will be strongly recommending it.

Reproduction in Education, Society and Culture