Book > Major Work > Geography, Earth & Environmental Science
Due to global supply chain disruptions, we recommend ordering print titles early.
SAGE online ordering services are currently unavailable due to system maintenance on May 14th from 9:15 am to 12:30 pm Pacific time. If you need assistance, please contact orders@sagepub.com. Thank you for your patience and we apologise for the inconvenience. 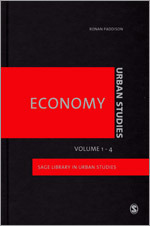 Throughout the world, the study of cities takes place within a wide variety of social sciences as well as in the some humanities disciplines. Furthermore, in the study of cities a major split occurs between those focusing the economic as opposed to the more social questions raised by cities. In the former the focus is on city economies, their change and how policy intervention is able to steer change; in the latter the emphasis is more on social life and change, power and inequalities. As such, the readings in both Urban Studies – Economics and Urban Studies – Society set out to map the multidisciplinary nature of the field.

Urban Studies – Economics focuses on the city and the urban economy – its meaning, interpretation, study, and measurement. It examines the city in the national economy and then relates urban economies in a globalizing world. The final volume reviews the management of the urban economy.