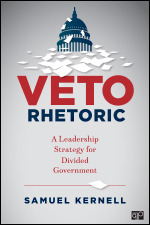 In Veto Rhetoric, Samuel Kernell offers a fresh, more sanguine perspective to understanding national policy making in this era of divided government. Contrary to the standard “separation of powers” representation of the veto which deals presidents a weak "take it or leave it” hand, Kernell shows that veto rhetoric forces Congress to pay careful heed of the president’s objections early in deliberations as legislation is forming. Moreover, the book introduces original statistical analysis to test the argument and extends previously reported analyses to include the Biden presidency. Veto Rhetoric will change the way students of Congress and the presidency assess their respective roles in making national policy.

Too often the examination of vetoes is limited to looking at the cases where negotiations between the president and Congress breakdown and a veto is issued. Veto Rhetoric provides exciting new evidence on veto threats by examining a rich, original dataset of presidential statements of administration policy in addition to narrative evidence based on archival research at numerous presidential libraries. Scholars and students interested in the presidency, Congress, and the policymaking process will all benefit from reading this valuable contribution.

While veto threats have a long history, presidents have come to be more reliant on this bargaining tool in the last few decades. Veto Rhetoric therefore serves as a nice companion to Sam Kernell's classic study, Going Public, which documented a similar trend with regards to presidential public appeals. Kernell's current study will no doubt once again lead presidential scholars to rethink how they understand and conceptualizing presidential-congressional relations.