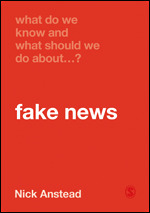 Share
Series:
What Do We Know and What Should We Do About:
Courses:
Introductory Sociology | Media, Culture & Society | Newswriting & Reporting
March 2021 | SAGE Publications Ltd
Download flyer Recommend to Library
The concept of Fake News has become widespread in recent years, particularly since the EU Referendum in the UK and Presidential Elections in the US, both in 2016. Voters need to be informed to make political decisions, but what if their media diet not only prevents them from getting the information they need, but actively shapes inaccurate perceptions of the world?

Drawing on examples and evidence from around the world, this book aims to make a timely intervention to the debate about the concept of fake news. Its underlying argument will have three objectives. First, to offer more precise definitions for a term that is often loosely used. Second, to offer a less technologically determinist view of fake news than much existing literature on the topic. New social media platforms, such as Facebook and WhatsApp, are clearly an important part of the story, but they exist in wider social, political and institutional settings. Third, to situate the idea of fake news (and our concern about it) in broader arguments about an ongoing crisis and loss of confidence in liberal democratic institutions. Only with this perspective, it will be argued, can we possibly address the question of what we should do about fake news.

The SAGE Handbook of Political Communication