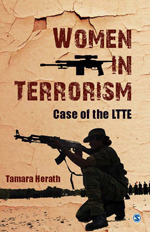 Share
Courses:
Introduction to Women’s Studies
December 2011 | 264 pages | SAGE Publications Pvt. Ltd
Download flyer Recommend to Library
Women in Terrorism examines the growing number of women actively engaged in terrorist activity and considers the significance of this for theorizing gender, conflict and social politics. Toward that end, the book studies Tamil women combatants of the Liberation Tigers of Tamil Eelam (LTTE), an armed resistance group identified as one of the deadliest terrorist groups globally.

Drawing on narrative life histories, the book canvasses three decades of ethno-nationalist war in Sir Lanka contributing to a major social change for Tamil women in Jaffna. It identifies the LTTE as providing an 'alternative' familial kinship founded upon friendship, which transcends caste and religion. The book reveals that the LTTE combatant woman's paradoxical equality may differ from Western feminist notions of emancipation, but represents a profound change within its own patriarchal society.

This original book presents the argument that engagement in armed conflict has transformed combatant women's understanding of themselves into female slayers of injustice and protectors of the Tamil nation, with a (re)constructed gender identity and sense of empowerment.

Notes on the Language Conventions
Entering a Tiger's Lair
The Lions and The Tigers: A Historical Overview of the Sri Lankan Conflict and the Role of Women
Displacement and Contributing Factors to Joining the LTTE
The Tiger Family: Kin Identity amongst Women Combatants of the LTTE
Death and the Suicide Bomber
Ah-lu-mai: Equality and Empowerment of the New Woman, Puthumai Pen
Ending a Journey: Final Reflections
Bibliography
Index