Donileen R. Loseke is a professor in the department of sociology at the University of South Florida. She received her BA and MA in psychology (California State University, Dominguez Hills) and her PhD in sociology (University of California, Santa Barbara). Her books include The Battered Woman and Shelters, which won the Charles Horton Cooley Award from the Society for the Study of Symbolic Interaction, and Thinking About Social Problems. She also is the editor of Current Controversies on Family Violence (with Richard Gelles) and Social Problems: Constructionist Readings (with Joel Best). Numerous journal articles and book chapters report the findings of her empirical research projects, which have been on a variety of topics including evaluation research, social problems, criminal justice, social service provision, occupations, emotion, identity, and narrative and have used a variety of data generation techniques including field experiment, written survey, in-depth interview, ethnography, and document analysis. Among her editorial positions include editor of the Journal of Contemporary Ethnography, advisory editor for Social Problems and Deputy Editor for Social Psychology Quarterly.  She received the Mead Lifetime Achievement Award from the Society for the Study of Symbolic Interaction and will be the 2017 President of the Society for the Study of Social Problems. 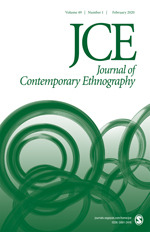