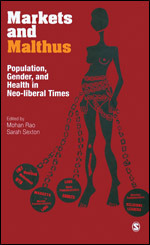 Share
Courses:
Introduction to Women’s Studies
September 2010 | 364 pages | SAGE Publications Pvt. Ltd
Download flyer
Markets and Malthus: Population, Gender, and Health in Neo-liberal Times explores the ideas and institutions that were framed at the 1994 United Nations population conference in Cairo and traces their trajectories sixteen years down the line. Why were Third World feminists profoundly critical of the Cairo consensus and process? How has the health of people around the world been affected by neo-liberal economic policies? What have these meant for women’s rights, including reproductive rights?

The book presents detailed case studies from various countries ranging from India and China, to Egypt, Tanzania, Uganda, and across Africa to Argentina, Peru, and throughout Latin America, as well as overarching themed essays. From the politics of abortion and immigration to rising levels of fundamentalist violence and sex selective abortions, the volume explores a range of issues from several vantage points. It offers startling new insights into these issues by linking them to neo-liberal economic policies that have profoundly shaped health policies globally. This book is essential reading for students of gender studies, public health, and demography, as well as policy-makers and activists.
Mohan Rao and Sarah Sexton
Introduction: Population, Health and Gender in Neo-liberal Times
Sarah Sexton and Sumati Nair
A Decade and More after Cairo: Women's Health in a Free Market Economy
Betsy Hartmann
Liberal Ends, Illiberal Means: National Security, 'Environmental Conflict' and the Making of the Cairo Consensus
Marlene Fried
The Politics of Abortion: A Note
Mohan Rao
An Entangled Skein: Neo-Malthusianisms in Neo-liberal Times
Rachel Simon-Kumar
Neo-liberal development and Reproductive Health in India: The Making of the Personal and the Political
Martha Rosenberg
A Decade After Cairo In Latin America: An Overview
Susanne Schultz
Redefining and medicalizing population policies : NGOs and their innovative contributions to the Post Cairo agenda
Kamran Asdar Ali
Structural Adjustment, Impotence and Family Planning: Men's Voices in Egypt
Meredeth Turshen
What has happened in Africa since Cairo?
Lisa Ann Richey
Reproductive Health, Family Planning and HIV/AIDS: Dangers of (Dis) Integration in Tanzania and Uganda
Susan Greenhalgh
China's Population Policies: Engendered Biopolitics, the One-child Norm and Masculinisation of Child Sex Ratios
Index

The volume is comprehensive in terms of coverage, discourse, theoretical and empirical findings and makes the reader workout some population issues having linkages with larger developmental agenda.

Markets and Malthus has an engaging collection of papers on population, gender and health.

This book is a must read for all those who are concerned about the lives of poor women. This remarkable collection of essays shows us, through case studies from across the world, how the Cairo Conference`s call for reproductive rights have been subverted by neo-liberal economic policies to promote fertility control at the cost of women`s health.

In the current climate when overpopulation arguments are again prominent, this book is essential reading for health and women`s rights activists and indeed policy-makers. It explores how the promises of reproductive health and rights at the ICPD in Cairo in 1994 were hollowed out by neo-liberalism. Both market fundamentalism and religious fundamentalism took their toll.

A key contribution to the literature on the nature and direction of population and reproductive health policies, and extremely relevant to the current Indian context where skewed sex ratios and persistently high maternal mortality rates are the preoccupation of policy makers.