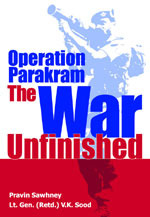 Share
May 2021 | 200 pages | SAGE India
Download flyer
On 1 October 2001, 29 people were killed at the hands of the Jaish-e-Mohammed in a terrorist attack outside the Jammu and Kashmir Assembly. India's immediate reaction was to insist that unless the US was able to rein in Pakistan, it would be forced to take matters into its own hands, which might be a setback to the US-waged Operation Enduring Freedom in Afghanistan. While President Musharraf immediately complied by condemning the act as one of terrorism, the Talibanised militants attacked the Indian Parliament on 13 December 2001. Enraged, the Government of India launched Operation Parakram, an operation that ordered the general mobilisation of the army for war on 18 December 2001. When Operation Parakram was called off on 16 October 2002 without meeting its professed objectives, it left many questions unanswered.

- Why was Operation Parakram launched?

- What were the military and political objectives? - Was the political leadership at all serious about the war?

- What role did international pressure play in weakening the government's resolve?

- At what stage did the government decide to opt out?

- What did the military feel about this decision? - Does Operation Parakram have a future?

Written by the perfect combination of a senior army officer and a journalist specialising in defence strategy, this important book answers these questions. It traces the changing pattern of militancy in Jammu and Kashmir and discusses both the military and political aspects of the Operation. The bottomline, say the authors, is that a war has yet to be fought, and Operation Parakram is not over.