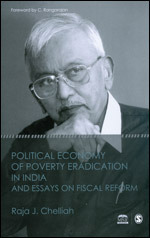 This book brings together three posthumous of Dr. Chelliah on reforms and poverty alleviation. Together they unravel the working of the Indian political economy and explain the causes behind persistent poverty in the country despite economic growth. The essays address the issues of effective means of poverty reduction by the states, reforms of federal fiscal relations, and taxes.

Dr. Chelliah's central premise is that the major fault of India's economic policy has been that it was largely based on democratic socialist thought, thereby entrusting the government with the greatest responsibility, but without delineating in sufficient detail of how the government should respond to the challenge. Having explained that, he takes the next step of suggesting innovative policy reforms that would help the states lagging behind to develop. In doing that, among other things, he makes various tax reform recommendations like those for personal income tax, corporate income tax, and wealth tax among others.

This book will be invaluable for students and scholars of development economics, political economy, public finance, public administration, and economics.

The book is a collection of three essays: The three essays put together make interesting reading for students of economics and professionals who closely track changes in India’s economic policy. For the policy maker it provides useful insights and a roadmap for action on the entire gamut of significant issues spanning poverty eradication, tax policy and intergovernmental relations… This book by Professor Chelliah lives up to the high expectations that it raises. It is comprehensive in content as it transverses the ground of poverty and regional inequalities in the Indian economy.

While stressing on the need to ensure that globalisation does not affect our independence or the conditions of the poor people, the book tries to explain the causes for our failure in getting the low-growth states to move forward and argues that unless the approach and methods are changed substantially, we will not succeed in transforming the low-growth states.