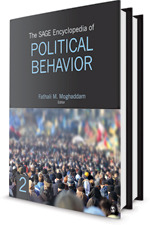 The SAGE Encyclopedia of Political Behavior explores the intersection of psychology, political science, sociology, communications, and human behavior to better understand why and how people interact with political processes. Bringing together scholars from around the world, the encyclopedia integrates theories, research, and case studies from a variety of disciplines to help readers better understand the complexities of political behavior. Contributors analyze the forces that shape the behavior of individuals, groups, and social movements and how that behavior impacts political outcomes and public policy debates.

In over 360 entries, the encyclopedia focuses broadly on the following topics:

Aimed at college and university students, this one-of-a-kind reference covers voting patterns, interactions between groups, what makes different types of government systems appealing to different societies, and the impact of early childhood development on political beliefs, among others. Topics explored by political psychologists are of great interest in fields beyond either psychology or political science, with implications, for instance, within business and management. This title will be available online on SAGE Knowledge, the ultimate social sciences library.

"Overall, this work takes a comprehensive approach to describing political behavior among groups and individuals and the underlying theories and concepts that form the basis for exploring the complex relationship between politics and human behavior. It is highly recommended"

" Overall, this title brings together an accessible set of essays as concise sources of information about the concepts, contexts, and practices that frame political behavior... Summing Up: Highly recommended. All libraries. All levels."