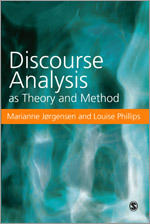 Discourse Analysis as Theory and Method

The book introduces the three approaches in a clear and easily comprehensible manner, explaining the distinctive philosophical premises and theoretical perspectives of each approach as well as the methodological guidelines and tools they provide for empirical discourse analysis. The authors also demonstrate the possibilities for combining different discourse analytical and non-discourse analytical approaches in empirical study. Finally, they contextualize discourse analysis within the social constructionist debate about critical social research, rejecting the view that a critical stance is incompatible with social constructionist premises and arguing that critique must be an inherent part of social research.

This well-written, opinionated book makes for an unexpectedly entertaining read. The authors deftly summarise the controversies of discourse analysis in the Introduction chapter, and, in Chpater 2, move onto an accessible explanation of Laclau and Mouffe’s discourse theory. The authors provide a fascinating explanation of this under-used theory. Laclau and Mouffe combined a Marxist theory of the social field, and a structuralist theory of meaning, in their major work, Hegemony and Socialist Strategy (1985). They created a post-structuralist “discourse theory”, in which the social field is understood as a web of processes in which meaning is created. The authors use Laclau and Mouffe’s theory in a detailed analysis of a lonely hearts column, to illuminate how the subject and respondent create and critique identity and social hegemony. Chapter 3 outlines Fairclough’s approach to critical discourse analysis (CDA), including the 5 features which are common between Fairclough’s approach, and other types of CDA. Fairclough’s own analysis of two job advertisements is presented, in order to illustrate how his technique can be used in practice. Chapter 4 outlines how discursive psychology can be used as a theory and method for research on communications, culture and the social field. Chapter 5 considers, and provides an example, of using multiple CDA approaches. The final chapter takes the reader through common objections to, and defences of, social constructionism. Ultimately, the final chapter, and the book as a whole, is a plea for social researchers to take a critical approach to their work, so as to contribute to the “unmasking of dominant, taken-for-granted understandings of reality”.
The discussion is wide-ranging and well-informed, with brief but insightful references to, amongst others, Vygotsky and Saussure on language, Gramsci on Marxism, Bourdieu on field theory and Foucault on power. This book is not a quick read, but is recommended for students wishing to learn, not just about CDA, but about the wider debates and theories of social constructionism.
Overall, the book works better as a primer on the theoretical aspects of CDA, rather than a “how to” guide on using CDA in practice. While there are short sections on methodological questions such as transcription choices, the book is strongest in its careful consideration of theoretical aspects. As such, the book would be more suitable for postgraduate researchers.

a nice introductory text for those considering a discourse analysis for their research project.

The field of discourse analysis is one that make or break the way in which students view this research tool. This book provides clear guidance on how to approach this method and gives clear examples with demonstration of the way in which this subject can be applied to research.

An excellent introduction to themes in discourse analysis

This title is also available on SAGE Research Methods, the ultimate digital methods library. If your library doesn’t have access, ask your librarian to start a trial.